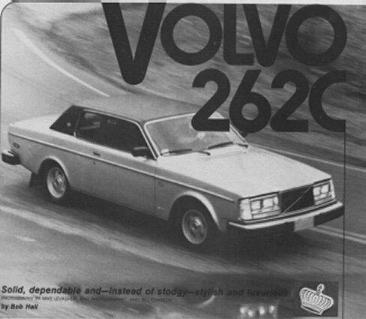 For as long as I can remember, Volvo has had a reputation similair to that enjoyed by one's maiden aunt: solid, dependable and stodgy (at least that's how I remember my maiden aunt). Now that Venerable Auntie Volvo is in the business of selling just under- and just over- $ 10,000 automobiles, someone at Volvo realized that the stodgy image was probably doing the company more harm than good in this particular segment of the market and Volvo has slid a couple of "image boosters" into the range on an admittedly limited scale. The 4-cylinder 240 series had the sporty 242GT added to the fold and the ten-grand-plus 260 range was the recipient of the 262C luxury coupe that we're looking at here.
The 262C is unusual in that it is the result of cooperation between Volvo and Bertone, the Italian design and coachbuiding firm. The Swedes don't often make tie-ups with other companies unless they feel it is really necessary. At first glance, the 262C seems to be a 2-door 260 series Volvo with a special grille, mega buck interior and chopped top a la Georg (Swedish spelling) Barris. In actuality, it is rather more than that. Bertone modifies the body shells and trims the interiors of the cars in its plant in Torino, Italy. From Italy, the soon-to-be 262Cs are sent back to Sweden for final assembly. 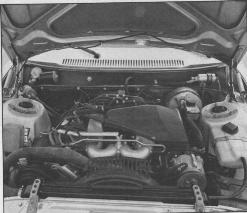 As things look now, Volvo is planning to import 2000 of these top-of-the-line 262s this year. All of the cars will be identical in appearance-silvermetallic with black interiors and vinyl tops.
Mechanically, the 262C is identical to the regular 260 line. The only powerplant available is the co-op Volvo/Peogeot/Renault 2.7 liter (162.6 cid) V-6 which the Volvo shares with the Peugeot 604. New this year is the option of Volvo's "Lambda Sond" three-way catalyst system that heretofore has been available only on the 4 cylinder 240 series. This is a mandatory option in California, but it is offered in the other 49 states for those who want to be 'squeaky clean." Unlike the carbureted Peugeot v-6, The Volvo 260s are equipped with fuel injection. Technically speaking, automatic transmission is "standard" on the 262C, since the automatic and maual gearbox cars have the same price. The only manual transmission offered with the 262C is a 4-speed box with overdrive. 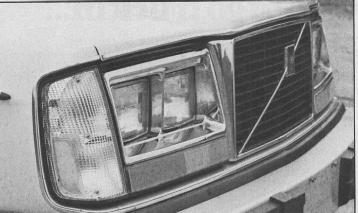 Acceleration of our automatic gearbox test car was perky, considering the fact that the the 262C is not the lightest car in its class. From rest, the car accelerated quickly without any wheelspin or other histrionics.
On our 73-mile fuel economy loop the 262C returned 19,7 mpg, which isn't bad for a $15,000 luxury car. The interior is without a doubt one of the strong point of the 262C . The seats and door panels are covered with real leather the kind used in some of your pricey Italian handbags. To say that this hand-made interior is plush is one of the greater understatements of the age. Workmanship is as you might imagine, superb. The wood panels have a strip of real wood which serves as a decorative accent and stereo speaker grille. On careful inspection one notices that wood grain of the left and right door panels are matched. That's not a common feature in some $25,000 cars. The seats are (as is usual for a Volvo) exceedingly comfortable and have a wide range of adjustment. Volvo's adjustable lumbar support knob is stil there for those who prefer some lower back support. That is a very nice feature that we wish a few other manufacturers would copy.The driving posistion is fine for most people, but as you might imagine the chopped top has removed a bit headroom. Go to your local dealer for a test sit if you are over 6 feet tall. Rear seat passengers ride in a state of luxury similar to those at the front.

There is a folddown center armrest for the rearseat, and we liked the rear 3-point safety harnesses in place of the more common rear lap belt. Like the other cars in the Volvo range, the 262C's forward visibility is excellent. Unfortunately, the "formal" rear window restrict visibility to the rear of the car in a very un-Volvo-like manner. Perhaps we're just used to the almost 360° visibility that other 240 and 260 Volvos enjoy. The rear quarter visibility is no worse than some of the domistic "personal coupes," however.
Ride and handling are better than the average demoestic $15,000 luxury car, unless you are in love with the wallowy ride of some of the domestics. The volvo ride is firm but not harsh. Handling is very sweet, with just a trace of understeer, but the car does seem to roll a lot while cornering. The standard power steering is just the way I like it, with plenty of road feel end a nicequick ratio. Some staffers did feel that the steering was slightly over-assisted, however.
Some miscellaneous comments about the car ranged from its cavernous trunk to the point made by one staff member that the 262C's use of a standard 260 series dashboard seemed rather out of place on a $15,000 car
Inasmuch as Volvo planning to import only 262C's to the states this year, the car should have the degree of exclusivity that the buyers of $15,000 cars tend to expect. Like its mechanically similar 264 "brother" the car seems to perform on a par with the comparative cars from Mercedes and BMW. I just wish they'd add some colors other than silver with a black interior, Oh well, if people want a Tahoe Green metallic Volvo with a beige interior, they'll have to buy a 264GL. 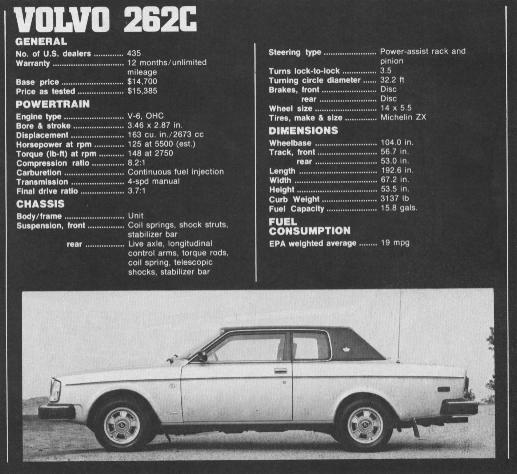 Go To Top of Page